The situation around the Debalcevo encirclement by February 11th.


1. By February 11th the AFU couldn't unblock the encircled group in the area of Debalcevo. I think that now it is quite possible to separate the Svetlodarsk group of the enemy and the Debalcevo group as two different operational factors.
A significant chunk of the M-103 road is subject to shelling by the NAF artillery and mortars in the area of Logvinovo where the NAF started to fortify the positions, the road may also be subjected to action by the armor and to automatic fire.
Additional control is provided by sabotage/reconnaissance groups that pop-up towards the road on various locations. In addition, the NAF are mining the area around the road. Under these conditions the communication between the Debalcevo and the Svetlodarsk groups of the enemy is impossible and the cauldron has indeed happened: the massive artillery shelling and the counter-attacks by the infantry and armor encountered the fire control by the NAF and the front attained positional features, which implies a catastrophe for the Debalcevo group. Of course there are certain difficulties for us here too, the enemy, having failed with unblocking the pocket, hammers our positions using artillery, which makes the work on fortifying the lid of this cauldron more difficult. But these are just annoying difficulties.


The process of fortifying the NAF positions under Debalcevo.

2. By yesterday the signs of disintegration of the military command already became evident (the officers simply flee) and also the reduction of the artillery fire intensity (the enemy started to conserve ammunition). The naziguard units, the MIA, and the AFU units with a high proportion of conscripts will lose morale faster than the other units and this will lead to the increase of the POW flow. The defense will hold on highly motivated punitive troops (not including "Donbass") and the seasoned AFU units, which demonstrated fairly high defensive resilience during January fighting. Actually, it is them who will form the skeleton of the resistance in the pocket. It is not worth underestimating the enemy: in those places where the defense is held by seasoned units with sufficient motivation, we will continue to suffer certain losses, although of course if politics won't intervene, then the enemy resistance will eventually be crushed.

3. In the nearest time the enemy positions will be pulling towards settlements: a part of the forces will be gradually pushed into Debalcevo, the units from the south-west part of the pocket will most likely retreat towards Olkhovatka. Also, after the sweep of the Chernukhino area the NAF may try to cut the encircled group in half between Debalcevo and Olkhovatka. As the caches of fuel/lubricants and of the ammunition for heavy weapons will run out, the mobility and the effectiveness of the junta military will decrease and its defense will become increasingly static. Correspondingly, a breakthrough from inside the pocket will become increasingly unlikely. 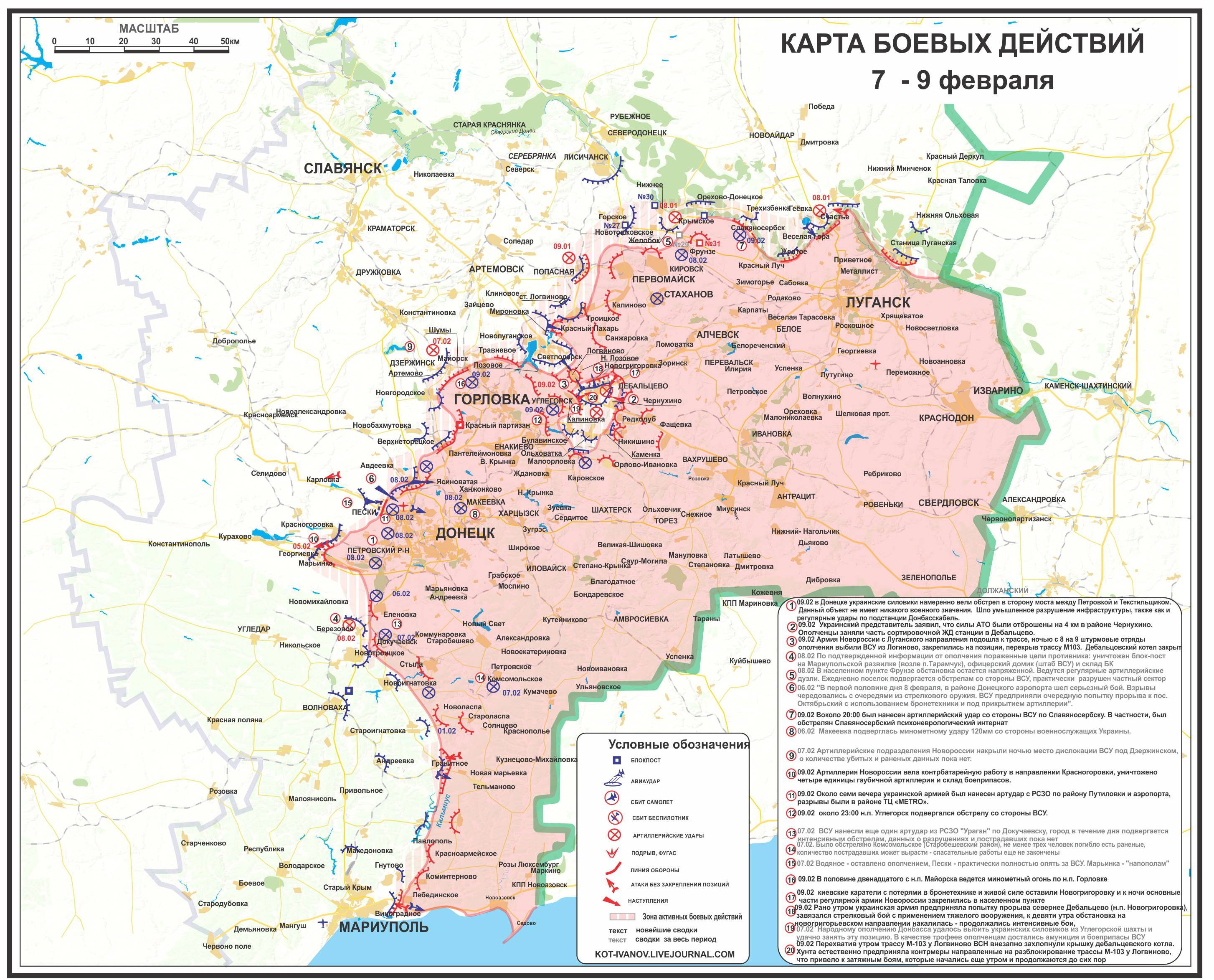 4. Of course, in the case of the continuation of the military action the enemy will try to assemble an unblocking group in the area of Svetlodarsk and recapture Nizhnyaya Lozovaya, Logvinovo, and Kalinovka in order to establish a corridor to Debalcevo, but now this is starting to get increasingly more problematic, because the NAF take over the convenient high points and mount their firing positions there using the disintegration of the junta defense in the former bottleneck of the truncated Debalcevo wedge. This will require significant efforts for sweeping them and it is far from certain that even with the maximal effort the junta will be able to do this (the fighting in the area of Krasnyi Pakhar and Sanzharovka showed that the NAF are quite stubborn at defending the captured positions). In this respect an alternative option with a strike under Donetsk or Gorlovka is possible with the goal of improving the situation of the Debalcevo and Svetlodarsk groups. Yesterday the NAF command announced that the enemy had been concentrating significant forces under Donetsk, pulling the operational reserves there. The possible directions of strikes are: the settlement of Spartak, Yasinovataya. In the case of a success the enemy may force the NAF to weaken the pressure on the Debalcevo encirclement. But until there is no strike the NAF will naturally put every effort to liquidate the pocket, where besides significant number of POWs it is possible to count on major trophies. 5. The yesterday's attempt by the junta to organize a success under Mariupol in response to the Debalcevo encirclement ended with nothing. A loud noise in the media, the footage of the empty settlements, losses, and POWs – all of this once again showed how much more important is the virtual nature of the war for the junta than the actual military need. In the end the punitive troops from "Azov" and the "bloody pastor" got some dubious PR. This is unlikely to reflect on the situation of the Debalcevo group in any way. In this respect Muzhenko, who arrived to the front to personally guide the work on fixing the situation under Debalcevo, will have to solve much more important tasks than simply posing for the camera.

6. Overall, as it is usual, the junta started to recoup its failures on the front against the civilians. Again they have hit Donetsk and other frontline cities quite hard. The "civilized world" won't notice this, as always.

And, as usual, a couple of evaluations for the current situation from the other side.

Kostya Grishin in Facebook demands that he be appointed him as the responsible officer for unblocking Debalcevo:
War doesn't like publicity. Publicity is annoying, in some cases it prevents making mistakes without responsibility, in some cases  carelessness or stupidity of the one who speaks may lead to leaking information.
What is to be done if the information already leaks from all possible holes? When the war is not a war and the nonsense which is carried out instead is spiritless, often cowardly and with brainwashing of the population instead of breakthrough and flank movements?
Is publicity necessary even if its measured application will save hundreds?
These questions are philosophic...
So, OK. The are more than sufficient ways and means to liquidate the operational encirclement of Debalcevo and to remove the two "pimples from the ass" – Logvinovo and Nizhneye Lozovoye. This could've been done yesterday. Tomorrow it may be done with much more blood. Or, in the case of a strike by the forces of the RF, not done at all.
The reasons are: the lack of initiative by the commanders of certain units, eye-washing the superiors, "fairy tales for the night" about the bad National Guard that doesn't want to cooperate, about the bad army or the MIA, that is to say the departmental squabbles...
The information war also impedes, the victims of which are also the highest officials in the country, which absent real local data take various bullshit from the internet as the truth.
Briefly. One person is needed with the powers who would be able to take the commanders of several units from the MIA, the National Guard, the AFU in his arms and would wreck all of the BS with which some people cover their reluctance to take responsibility and would solve the problem of the so-called Debalcevo cauldron. The ATO representatives for some reason cannot solve this problem  Well, then give us a "commissar" from the center. If nobody wants to do it, then let me have :facepalm1: at least oral, my ass, credentials. Let's do something finally! I don't think that in the case of a disaster the informational vacuum cleaner with which the population's brains will be cleaned will work again this time. Everything is too serious and everyone is too tired.
I wrote this post for at most 2-3 people in the country. I know that you read this. Act. Tomorrow may be too late.

The chief editor of "Censor" Butusov confirms the failure of measures on unblocking Debalcevo:
"During the whole day there was fighting in the area of Logvinovo on the M-103 road. Unfortunately, the enemy that broke through wasn't eliminated. The Russian units hastily fortify the positions in the area of Logvinovo and already managed to set up defensive positions.
The Debalcevo foothold is still in an operational encirclement. This means that uninterrupted supply of our forces is difficult. And given further redeployment of reserves the enemy, certainly, will try to completely close the operational pocket in the nearest time.
The M-103 road is cut for the second day. And the enemy is redeploying additional forces for holding Logvinovo, at the same time it is trying to threaten Svetlodarsk. We are quite capable of unblocking the ring under Logvinovo. There's no major concentration of the Russian forces there, but they are getting reinforced and with each hour it is getting more difficult to eliminate the enemy.
The situation is getting worse and there are no positive changes in this area.
The enemy, exhausted by fighting, almost completely stopped attacking on other locations of the front and pulled its main forces towards Debalcevo, which opened up other locations of its front. So it is impossible to push the enemy out of Logvinovo without concentrating our forces. It is impossible to be strong everywhere — a maneuver by ways and means is necessary.
It must be noted that on the whole perimeter of the foothold the Ukrainian units confidently hold their positions and repel all attacks. However, the interrupted communications already started to create problems: the activity of our artillery in the area of Debalcevo sharply decreased. Also, several of the wounded fighters receive help in the city, they cannot be evacuated into Artyomovsk."

Overall, the military situation of junta under Debalcevo sucks, so they clearly need an operational pause after the diplomatic talks more than the NAF. Despite all difficulties and losses the NAF in the end managed to conclude the long and hard January offensive with a serious operational success by closing the encirclement ring. A whole number of issues and growing pains were uncovered during the offensive, which they have been learning to overcome in one way or another. We will discuss this in the summary materials about the January offensive by the NAF.

In the case of making a decision about the next "truce", it may take effect only in several days (on Friday-Saturday), so one way or another the military action will continue for at least 2-3 days, after which the expected operational pause may happen, in which both sides will count their losses and lick their wounds in preparation for the spring campaign (unless a miracle will happen and a political compromise that satisfies everyone will be found).

http://cassad.net/tv/videos/4967/ (in Russian) – the video-summary by "Cassad TV" for February 9-10th
http://voicesevas.ru/news/yugo-vostok/9756-hronika-voennyh-sobytiy-v-novorossii-za-11022015.html – the online-broadcast of military action on the "Voice of Sevastopol" for February 9-10th.

UPD: And yes, here Abroskin is whining that yesterday our SRG attacked the city police office in Debalcevo and brought down the local police boss. 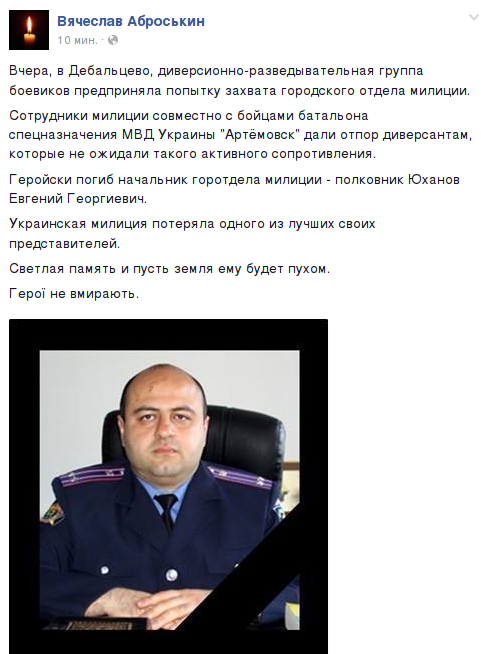 Translation of the text above:
Yesterday in Debalcevo a militant sabotage/reconnaisance group tried to capture the city police office.

The police officers together with the fighters of the special battalion of the MIA of Ukraine "Artyomovsk" repelled the saboteurs, which didn't expect such an active resistance.

Ukrainian police lost one of its best representatives.

Let the memory of him be cherished and may he rest in peace.

Actually, this is a confirmation of the fact that even though the junta is still holding Debalcevo itself, it cannot prevent the seepage of the NAF SRG into the city any longer.

UPD: And just piling up, a video from the captured Redkodub.