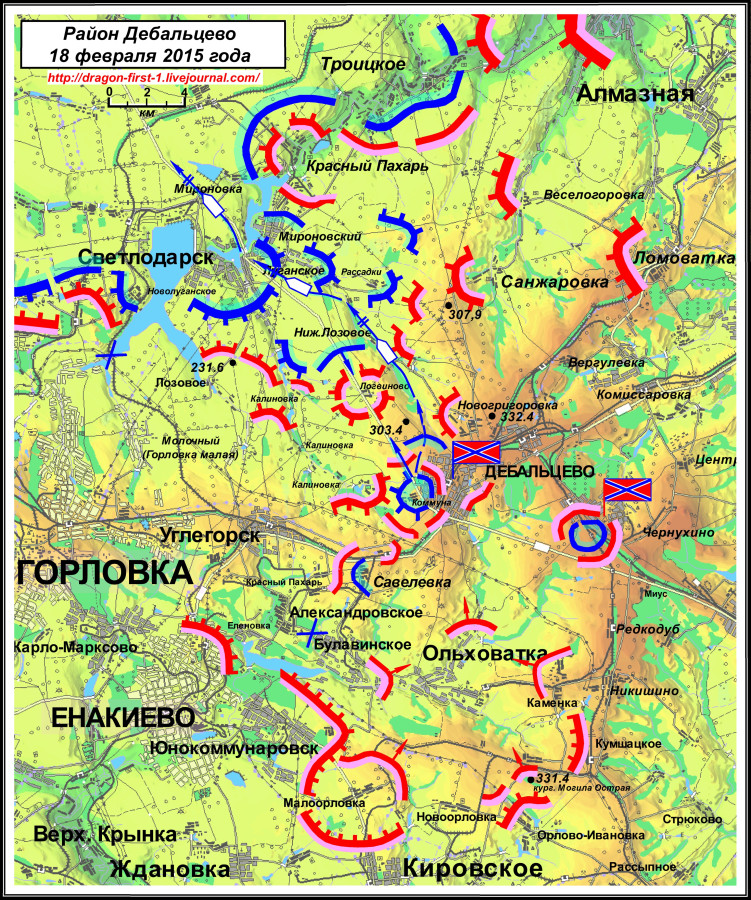 Today we managed to obtain more precise information about the Debalcevo cauldron from those who had to do with the creation and the liquidation of the encirclement.

1. Overall, in the pocket south of Logvinovo there were about 4.5 thousand people out of the original group of 8-9 thousands. The group was in essence cut in half. The crucial success was the sudden strike on Uglegorsk, after which the events turned in our favor, following the unsuccessful offensive in the area of Svetlodarsk. Slippages during the offensive happened due to the issues of military cooperation between various units, the lack of ammunition and heavy weapons in some of the LPR army units, and also due to stubborn resistance by some of the junta units, which ended up exceeding the expectations.

2. After "Olkhon"s group captured Logvinovo, the units of the GRU DPR Spetsnaz were redeployed there, which repelled the offensive of the unblocking group by engaging in fierce firefights, destroying 18 armored vehicles in the process. During this fighting the Spetsnaz suffered serious losses – 5 KIAs, more than 30 WIAs (the losses were mostly inflicted by powerful artillery fire). In essence the actions by "Olkhon"s group (which captured Debalcevo) and of the GRU DPR Spetsnaz (which repelled the counter-attacks on Logvinovo) pre-determined the success of the whole Debalcevo operation, which got stuck in the area of Mironovka for some time. At the same time it is worth noting that the defenders of Krasnyi Pakhar managed to hold important positions for the NAF, which may be later used to encircle the Svetlodarsk group of the enemy.

3. As for the exit from the encirclement — a part of the junta forces got out of the ring by leaving their heavy weapons behind by agreement (that is, the situation was repeated akin to Starobeshevo when the breaking junta group surrendered its tanks and some of the IFVs to the militia to get out of the Ilovaysk pocket), some of the forces tried to break through without an agreement (just like near Ilovaysk) – and they got crushed; once again some idiots decided that the agreements (exit in exchange for surrendering materiel) don't concern them. Up to 500 people were taken as POWs, about the same number tried to seep through the fields and country roads to the north of the M-103 road, some of them were on foot. The majority of heavy weapons were simply abandoned in the cauldron (either by agreement or simply due to fleeing the cauldron, so indeed there are a lot of trophies). Overall, an assorted collection of units managed to get out that amounted to 1-1.5 battalions. All of the artillery, the majority of armor and significant stores of ammunition were abandoned in the cauldron. All of the fairy-tales about the organized exit is just propaganda BS.

4. Regarding the junta losses: the number of 1200-1500 KIAs in the fighting for the Debalcevo bulge is closer to the reality. They didn't tell me about our losses in detail, but they were also quite significant, both in personnel (the heaviest burden of the losses fell on the end of January) and in materiel (on the other hand, the trophies will more than compensate for the materiel losses). During the whole operation the crucial damage factor, as before, was the artillery and MLRS fire. To some extent our artillerists managed to "outshoot" the junta artillerists near Debalcevo.

Plus a great video from near Chernukhino.