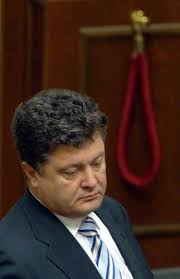 Mr. Poroshenko finally gave birth http://www.president.gov.ua/en/news/30643.html to the obvious decision about "renewing" the punitive operation in Donbass.
In fact it went and will continue to go on because the announcement of truce did not bombardments, deaths, and murders. The reasons for this are clear – the sides simply don't have common ground and no solutions are acceptable except the opponent's capitulation. Both sides, on the background of the low-intensity combat of the recent days, were massing forces and prepared to the inevitable activation of fighting. The pile of BS, with which Mr. Poroshenko spiced up the announcement about the termination of the ceasefire, so to say crowns this senseless "truce", which served the interests of war.

The necessity of destroying the DPR and the pressures from the side of fascist radicals will require active offensive actions on the territory of the DPR and the LPR in the nearest 1-2 days. I would risk predicting that they will start with resuming shelling of Slavyansk and Kramatorsk and also with strikes directed at the border checkpoints. In doing so, during the nearest week many people will perish on both sides.