As it is quite obvious, the campaign of harassing Mr. Strelkov that was launched yesterday did not come from nowhere and has a purely political genesis. Leaving Slavyansk, where as many expected he would perish together with his brigade, he became a so-called "wildcard", which ruined a number of the previously existing scenarios.
( Collapse )

This video was shot by the militia fighters during the battle for the "Dolzhansky" border checkpoint. Uploaded today.
The most interesting thing is that the junta announced on July 1st about capturing the "Dolzhansky" checkpoint, and the video is from today, then it turns out that the checkpoint is still not taken.( Collapse ) 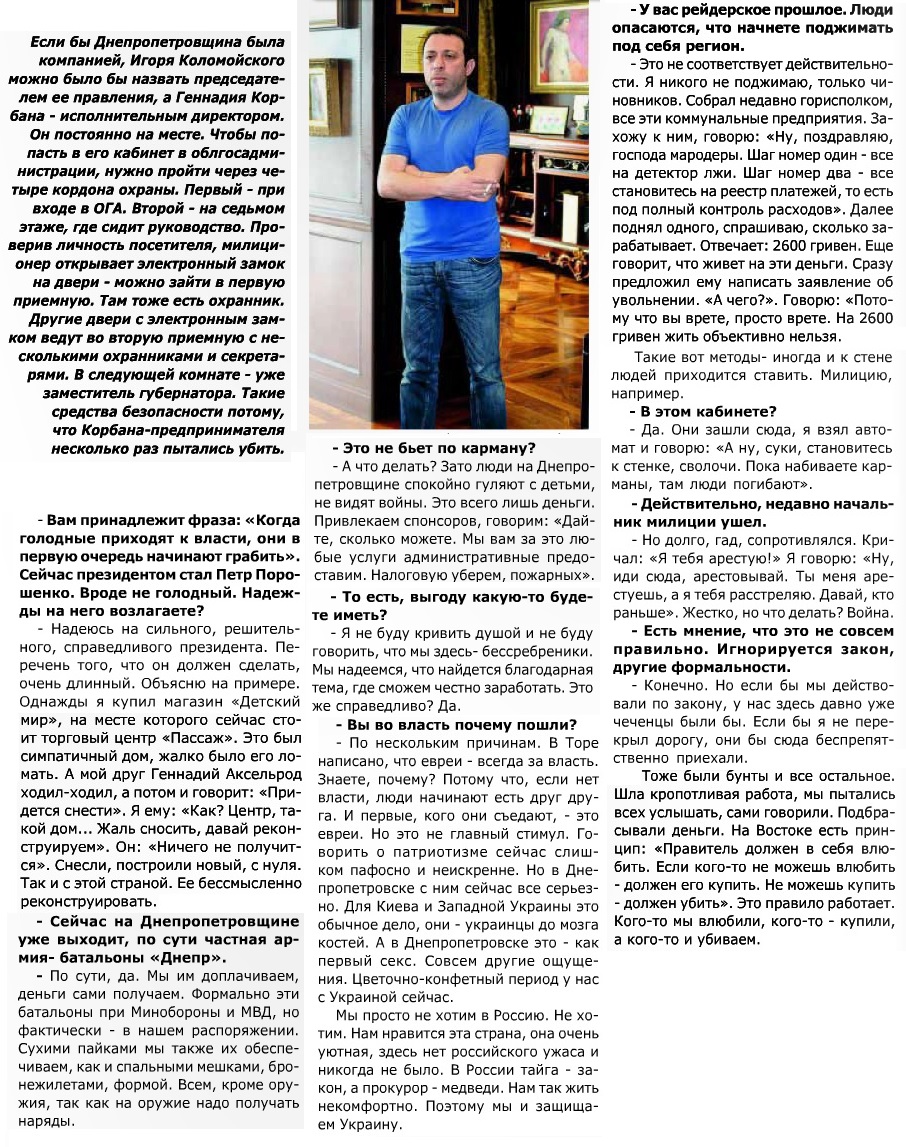 Translation:
If Dnepropetrovsk region was a company, then Igor Kolomoisky could be called the president of its board and Gennady Korban could be called its CEO. He is always at work. In order to get into his cabinet in the regional administration one must pass through four layers of security. First – at the entrance of the administrative building. Second – on the seventh floor, where the leadership sits. After checking the identity of the visitor, a police officer opens an electronic lock on the door – now you can enter the first reception room. There there is another guardian. Another door with an electronic lock leads into a second reception room with several guards and secretaries. In the next room there is the governors deputy. Such means of security are in place because there were several attempts on the life of Korban-the-enterpreneur.

– The phrase "When the hungry come to power they first start to steal". Now Petr Poroshenko became the president. Apparently, he's not hungry. Do you have hopes for him?

– I hope for a strong, decisive, and just president. The list of what he has to do is very long. I can explain with an example. Once I bought the store "Children's World" in place of which there is now a trade center "Passage". This was a pretty building, it was sad to break it. And my friend, Gennady Akselrod waked around and then says: "We'll have to raze it". I say: "How? Center, such a building... It is sad to raze it, let's reconstruct it". He: "This is futile". We razed it and built a new one from scratch. The same with this country. It is futile to reconstruct it.

– Now in the Dnepropetrovsk region, it turns out, there is a private army – the "Dnieper" battalions.

– In essence, yes. We pay them extra, we get money ourselves. Formally, these battalions are under the Ministry of Defense and the Ministry of Interior, but effectively they are under our command. We also provide them with dry rations, as well as with sleeping bags, body armor, uniform. Everything except weapons, because for weapons we have to get requisitions.

– Doesn't this hit the pocket?

– And what can we do? And yet people in the Dnepropetrovsk region walk freely with their kids and don't see war. This is just money. We attract sponsors, we say: "Give as much as you can. For this we will provide any administrative services. Remove tax collectors, firemen".

– That is, there is some benefit for you too?

– I won't palter and won't say that we are above taking money here. We hope that there is a grateful topic, where we can earn fairly. Isn't this just? yes.

– Why did you go into power?

– For several reasons. In Tora it is written that jews are always for the power. Do you know why? Because if there is no power, then people start to eat each other. And the first who get eaten are the jews. But this is not the main stimuli. To speak about patriotism right now is too bombast and insincere. But in Dnepropetrovsk everything is very serious with it right now. For Kiev and the Western Ukraine it is typical, they are Ukrainians to the bones. And in Dnepropetrovsk this is like first sex. Completely different feeling. The flower-candy period between us and Ukraine is now.

We don't want into Russia. We don't want. We like this country, it is very comfortable, there is no Russian horror here and there was never. In Russia taiga is the law and the attorney general is the bear. We are not comfortable living this way. That is why we protect Ukraine.

– You have a raider past. People are afraid that you will start squeezing the region under yourself.

– This is not true. I don't squeeze anybody, only the bureaucrats. I assembled the executive committee recently, all of these communal enterprises. I come to them and say: "Well, greetings, marauder gentlemen. Step one – everybody to the polygraph. Step two – everybody enlist into the payment registry, that is under complete control of expenses." Then I picked one up and asked how much does he make. He says: 2600 UAHs. He also says that he lives for that money. I immediately told him to write the letter of resignation. "And why?". I say: "Because you lie, you just lie. There is no objective way to live for 2600 UAHs.

Such are the methods – sometimes people have to face the wall. Police, for example.

– Yes. They came here, I took the machine gun and say: "And here bitches, face the wall, bastards. While you are filling your pockets, people are dying there".

– There is an opinion that this is not quite right. The law is ignored, other formalities.

– Of course. But if we acted by the law, there would be Chechens here already for a long time. If I wouldn't block the border, they would come here freely.

There were riots and everything else. There was hard work, we tried to hear everybody, we spoke ourselves. We dropped money. In the East there is a principle: "The ruler must force to fall in love with him. If you can't force somebody to love you then you must buy him. If you can't buy him – then kill him". This rule works. Some people were forced to love us, some were bought, and some we kill.

Such a remarkable character born in the 90s.
A bit more detail in the link: http://poltora-bobra.livejournal.com/908737.html (in Russian)

From the comments of the same character.
Ukraine must turn into Latvia. Latvia hates Russia. Generations must hate Russia, exactly hate