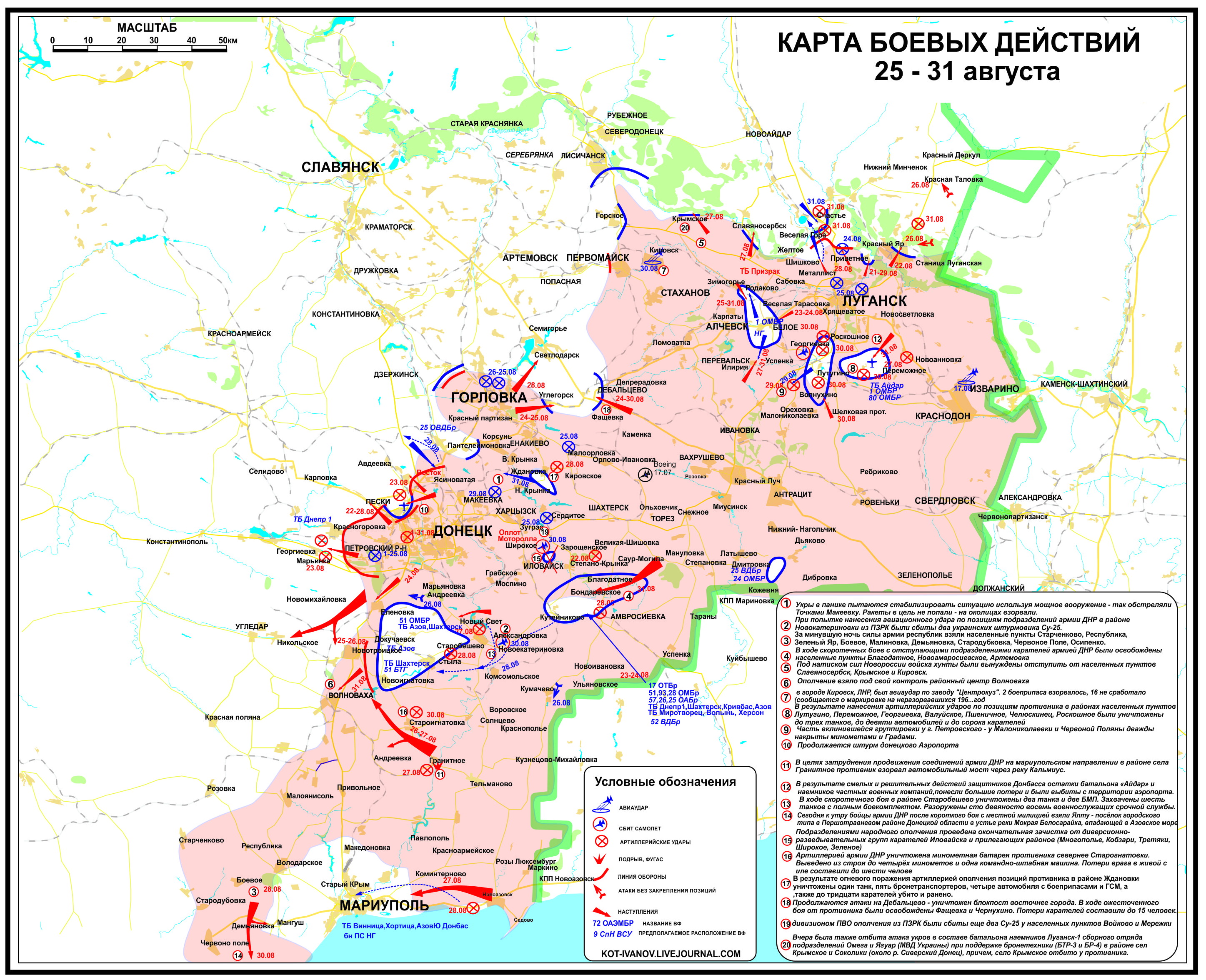 A fresh article by M.Litvinov, which is dedicated to the consequences of the offensive conducted by the army of Novorossia and the disintegration of the south front of the fascist junta.

I suppose that the armed forces of the people's republic will devote special attention of their reconnaissance and strike forces toward the management organs of the two operative brigades of the NGU and to their artillery and mortar detachments. This needs to happen as they appear in the war zone. Because these detachments are the strong side of these new units, they are also their weak spot due to their novelty. As for the battalions themselves - even though they have good potential, they are unseasoned and their first combat experience will define the subsequent fate of each of them. It will be extremely useful if this experience will occur under the conditions of the absence of significant numerical advantage on the side of of the punitive troops and with a wide application of the means of heavy firepower of the people's republics. But, of course, this would be ideal.

The military command of the DPR was absolutely correct in their determination of the most perspective direction for their offensive - on Mariupol. The offensive on this direction potentially allowed to achieve a strategic, an operational, and a tactical success. The strategic importance of Mariupol is difficult to overestimate. Actually, it is precisely the control over this city and over its economic and export potential that clearly separates the two alternatives for the people's republics of Donbass: the fate of Greater Transnistria and the fate of truly sovereign states. Moreover, conducting the elections into Verkhovnaya Rada on the territory of Mariupol will strongly undermine the legitimacy and the claims of sovereignty for the DPR. Finally, the Mariupol port will allow the DPR to unfold the widest possible military and technical cooperation with Abkhazia. On the other hand, the latest consideration is certainly somewhat compensated by the fact that it is well-known that the Kremlin dumped everything and that the stuff that it dumped accumulated in the neutral zone of the former Russian-Ukrainian border in Donbass. Nevertheless a major port is a major help in military and technical cooperation.

However, it must be noted that a strategic success would be constituted by a complete liberation of Mariupol and primarily of the whole area of the port. Simply occupying the settlement, especially with a threat of continuation of the enemy control over the local port and the airport would not be much of a strategic success, which is in general confirmed by the humanitarian tragedy of Donetsk and Lugansk. One condition for the strategic success of conducting such an operation would be its decisiveness, the factor of surprise, and the allocation of a sufficient amount of forces. The conditions for such an operation were present only during the first decade of August. It was exactly then when it was possible to liberate Mariupol and capture a lot of resources and high ranking and informed POWs after a daily blitz using the territory of the Russian Federation. The amount of forces that were required depended on the real situation in Mariupol. Alas, the sad story of Miusinsk and Krasnyi Luch and the organizational weakness of the militia that were in the foundation of that story didn't allow it to achieve this strategic success.

However, it must be noted that this was exactly an absence of a strategic success, but not a defeat. And the case is not in the preservation of the ability to liberate Mariupol. This ability is indeed preserved. This is true even despite the fact that the first wave of panic in Mariupol settled and the 1-st operational brigade of the NGU significantly strengthened its defense. Nevertheless, given determined pressure that is applied over a couple of weeks by the force of 10-12 infantry battalions, a couple tank battalions, 5-6 artillery divisions, the city will fall. But there are serious doubts that the armed forces of the people's republics can afford such an expenditure. Because they face a wide range of problems that must be solved to support normal life on the territories controlled by the people's republics. This includes the elimination of the Lutugino group of the punitive troops, routing of the punitive strongholds within 20 km from the outskirts of Donetsk, Gorlovka, and Lugansk, the liberation of Lisichansk and Severodonetsk.